So what I want to know is, when did Halloween arrive and how did it get here so quickly? Wasn't Labor Day like,... last week?

Ever since our son was old enough to wield a knife, we've been carving pumpkins for Halloween. We started with triangle eyes and teeth all those years ago, and then when we discovered the pattern books, we graduated to fancy cats and haunted houses that we never could have crafted on our own. A few years ago, we had something like a dozen carved pumpkins sitting out on our front lawn. It all looked very artistic, but we simply followed directions and connected the dots.

I have to admit, homeschooling lent itself to this project. The entire day before Halloween (be it a school day or not) was devoted to pumpkin cleaning and carving. This exercise helped my children on their standardized tests each year, I promise.

But since they've been in school, we no longer have TIME for the pumpkin carving, and this makes us all very sad. Last year we each carved one, but it was more a chore than anything else. So this year, even though Labor Day was just last week, we talked about how we could make the pumpkin carving happen, and it would be FUN again. We also talked about the lack of time in all our lives. (Damn homework.)

So the plan was for me to purchase pumpkins last week and to clean them out some afternoon after work. Then, on one of the evenings when there was (hopefully) less than three hours of homework, the kids (and their dad) could carve their pretty pumpkins.

I put pumpkins on my grocery list this week. I went grocery shopping on Thursday. Before I went, my middle daughter asked if I could take her to Wal-Mart later to look for Halloween accessories. So when I grocery shopped, I deliberately did not buy pumpkins. After all, my basket was full, and I would be on a Halloween mission later that evening. I could get pumpkins THEN.

I don't know what happened. The evening was full of cross-country meets and basketball and a dog that got into the trash and homework and, and... Suddenly it was Friday.

Friday morning was full of a Halloween party for the babies where I work, and I had a long-distance friend coming in for the day. We were to have lunch. But then my son ended up going to the hospital at noon for what we thought might be appendicitis. The day became a roller-coaster ride into oblivion.

Ok, my son does NOT have appendicitis - we still don't know what he has, but he's back at the dorm, doing ok. But there's more. At 3:30, I had to take one daughter to a youth group party 20 minutes away from home. I had to be back at the high school by 4:45 to chaperone an event I had committed to weeks ago. (Note to self - what the hell was I thinking?) At 7:30, when we finished at the high school event and dragged ourselves to a local restaurant to get dinner, I remembered that we still didn't have pumpkins.

At 9:00, when we finished dinner, we went to the local Hannaford, got a shopping cart, and went into the store to get our pumpkins. No pumpkins in the produce section - maybe they have them in a display up by the registers? No. Nothing. The nice lady told me (while hiding a smile) that they ran out of pumpkins two days ago.

By this time, we had to drive back out into the middle of nowhere to pick up our other daughter from the youth group thing. We stopped at another store on the way there. No pumpkins.

We went to bed last night with my husband telling us he'd get up early this morning (which has never happened on a Saturday in all the years we've been married) to go find us some pumpkins. That way, we can clean and carve pumpkins ALL DAY.

Guess what? It's 10:00 a.m. and he's still not up. I'm not waking him. I will drag out our ceramic jack-o-lanterns, put candles in them, and they will have to do. Maybe next year we'll get it right. Or maybe not. Maybe that time in our lives is over.

You know winter is coming when...

... when you hear a rumbling noise outside and you think it might be a snowplow. But then you realize it was your husband's stomach.

... when you have a constant feeling of panic about getting all the leaves up before the first snow.

... when you know you probably won't get all the leaves, because often they don't all fall before the first snow.

... when you wear a scarf each day - and not just to make a fashion statement.

... when the dog no longer takes his time going out for the last time each night.

... when you get the urge to bake. Today I made oat bran muffins, sourdough bread, and there is pumpkin bread in the oven right now.

... when you excuse any weight gain (from eating the above comfort foods) by saying things like, "Yes, but I need the extra insulation for winter!"

As I look out at our lawn, there are SO many leaves already on the grass, the driveway, the porch, the garden, and in the woods. But when I look up, there are so many MORE LEAVES still on the trees. Deciding whether or not I want them to hurry up and fall or to stay up there (and thus miraculously hold off winter, which really would never happen) just makes my brain hurt.

As I drove into the parking lot at the trail-head, the thermometer in my car read 61 degrees. That might be a bit of a stretch, as my car is always optimistic about the weather, but it WAS lovely out there. We got to the top of the mountain and saw this: 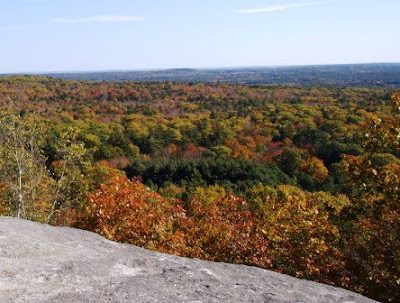 And then when we sat down to eat, we were swarmed (literally) by lady bugs. Yes, lady bugs. It was an odd sensation to be swatting at the slow-moving, awkward-flying little gals, but swat we did. They were everywhere. I've spoken to other folks tonight who say it's like that all over the area - lady bugs galore. What does that mean? That it was a rainy summer? That we should expect a mild winter? A harsh winter? A flood? An earthquake? The end of time?

I mean, it was THAT weird.

Ok, so we enjoyed the pretty foliage you see in the photo above, which was pretty much past peak. In fact, from far away it looked colorful, but up close, we saw a lot of this: 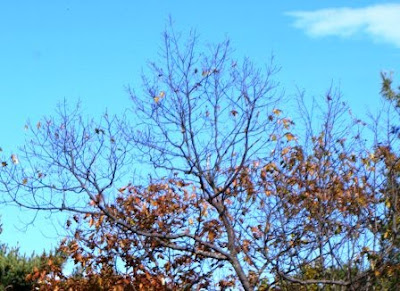 Either way, if you're looking for some fall color, you'd better get out there ASAP. The leaves are falling and we have more rain and wind forecasted this weekend. Oh wait, I didn't say that. Sunshine forever! :)

He's taking me WHERE?

I think I've posted here before about the fact that nearly a dozen years ago, when my husband was fresh out of the Navy and looking for a new career, my only request was that he move us to a place WEST of the Mississippi.

Obviously that didn't happen. One might say that my husband has a confused sense of geography. Or one might say that he didn't give a flip where I wanted to be; he just needed a job. One also might say that it was divine intervention, as I was at a point in my life when I needed a bit of distance between myself and my extended family (all of whom happen to live west of the Mississippi).

Ha. Believe it if you dare.

Also remember that I've been sick for two weeks and I'm still on the mend, so if I sound snarky or snippy, kindly look the other way.

The POINT of this meandering story is that for all the years that we have lived in Maine, I have been thanking my dear husband for bringing us here.

What? You may be asking if I thank him during the bitter cold winter months when we are surrounded by snow measured in feet and our days have 16 hours of darkness. The answer is YES.

I love it here. I LOVE it here. I'd be lying to you if I said it was perfect. I mean, there are those cold winter months with all the snow and lack of daylight. We also have PEOPLE here, which means, we have traffic (though most city folks wouldn't call it that), we have political disagreements, we have a bit of crime, and we have most of the problems that can be found elsewhere.

But there is so much good here, that it far outweighs the cold. The people are so danged nice. Not fake nice - just nice. The scenery is so beautiful. The air is so clean. The towns are so small. Sometimes it almost feels as if we're playing real life. Like, if we have municipal issues or town budget problems or tax hikes or some such thing, we can just elect one of our friends to fix it all up. And they will. That's not quite how it is, but that's how it FEELS... if that makes sense.

Last week we drove to Sabattus to our favorite apple orchard. The road was narrow and quaint, the pumpkins prolific, the trees just beginning to change. Young kids were riding their bikes along country roads. Without helmets. And it was NEAT. It seemed more real somehow.

Today I drove along Coastal Route One and the foliage was simply amazing. Every year we see this and every year I think I'm going to get used to it and maybe become complacent about the beauty. Never. I find myself oohing and aahing in the car alone, wishing someone were there to SHOW it to! And if that wasn't enough, a lone bald eagle was soaring overhead, peering at the river down below.

So I broke the cardinal rule and sent my husband a text message while I was driving. (Ok, really I was at a red light, so it was ok). I simply thanked him yet again for bringing me to Maine.

Thank you, my sweet husband, for bringing me to Maine!

Yes, I'm a day late. It didn't really hit me until today that we are in October. And besides that, I'm still sick. But I don't want to talk about that. 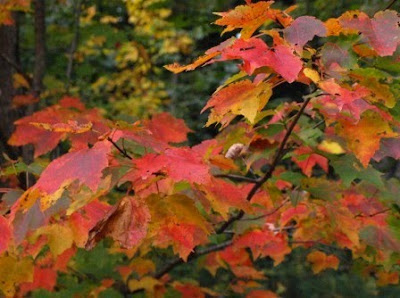 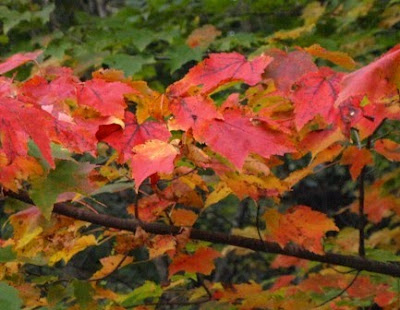 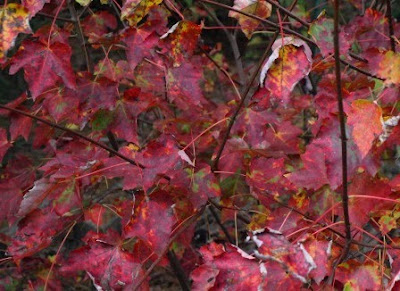 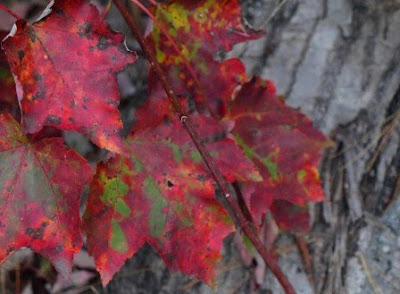 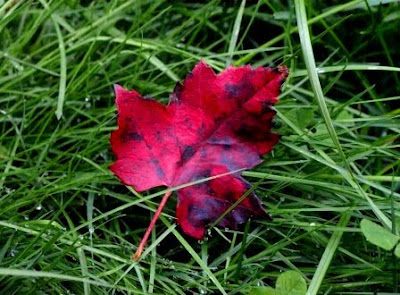 Either way, I think the leaves are pretty. Vibrant or not, the colors never cease to amaze me at this time of the year. :)

My Corner of Maine - HOME

Followers of this Blog

View my page on Blog Writers